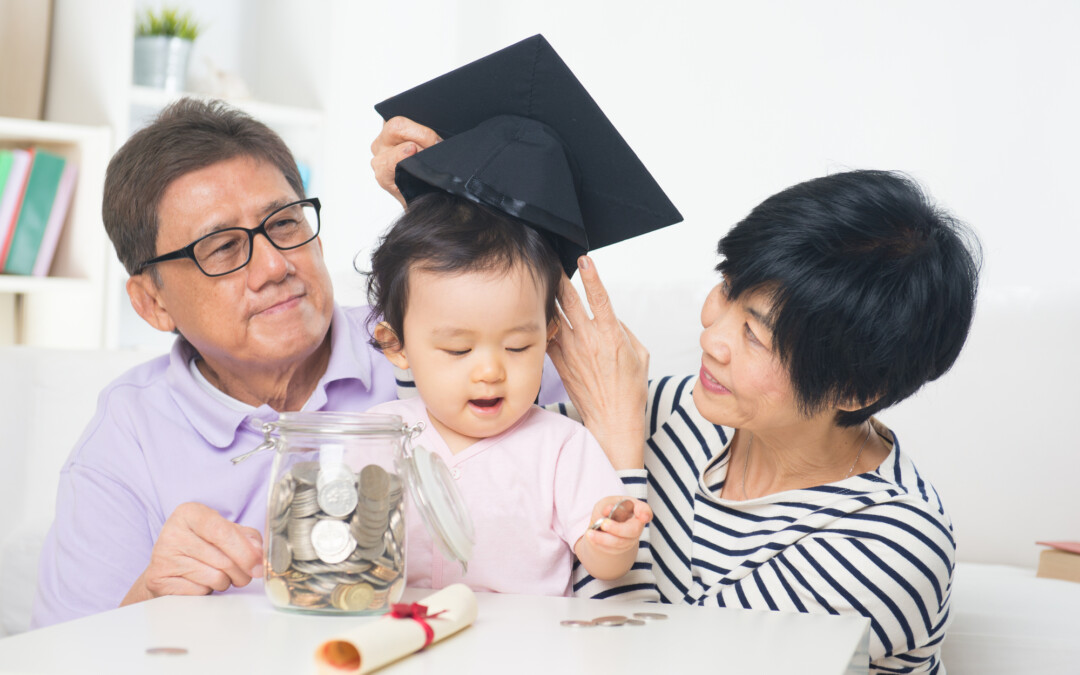 Recent changes to FAFSA (Free Application for Federal Student Aid) means that grandparents can soon leave money for their grandchildren’s education without harming their chances for financial aid.

The FAFSA Simplification Act, which was signed into law in December 2020, made several changes to the FAFSA form and Higher Education Act of 1965. One of those primary changes is that students won’t have to disclose cash support on the FAFSA form.

For grandparents who want to contribute money towards their grandchildren’s tuition and other school expenses, the Simplification Act alleviates concerns that their cash contributions will hurt their grandchildren’s eligibility for financial aid. These changes could make 529 plans more popular as a financial tool for educational savings and an estate planning tool for generational legacies.

Students who attend a four-year, private college can expect to pay as much as $32,000 in tuition every year. That doesn’t include other educational expenses such as housing, meals, textbooks, and other school supplies. According to the group Scholarship America, in 2020, the average per-student debt was about $30,000.

To defray the steep costs of college, many parents and grandparents invest in a 529 plan, which is also known as a qualified tuition program. Congress created Section 529 of the Internal Revenue Code in 1996, allowing states to set up their 529 plans with certain benefits. The 529 plans can fund college, primary, or secondary school tuition. Students can also use the funds for qualified expenses such as off-campus rent and utilities, food, school fees, textbooks, and equipment (ex: laptop, printer, software, internet access).

Georgia established its 529 Plan in 2002; currently the plan allows Georgia tax filers to deduct up to $4,000 per year, per beneficiary if filing a joint state income tax return. Earnings in the account are tax deferred and withdrawals taken from the 529 Plan for postsecondary education expenses are federal and Georgia tax free. While the 529 Plans are commonly referred to as parent-owned plans or grandparent-owned plans, under the Georgia requirements, anyone can start a plan for anyone else. You can be a blood relative, a step-relative, related through marriage, or even a close family friend.

Prior to the FAFSA Simplification Act, students would have to report any money they received from a 529 plan as untaxed income on the FAFSA form. Depending on how much they received, the student may have been disqualified from receiving any other form federal student aid. This was true for both the grandparent- and parent-owned 529 plans. But under the new Simplification Act, the 529 distributions from grandparents will not count towards a student’s income on the FAFSA form.

It’s important to note, however, that not all the changes under the FAFSA Simplification Act have been rolled out and implemented. The Department of Education initially scheduled the income reporting changes to happen for the 2023-2024 school year. But the group recently announced that those changes will be delayed until the 2024-2025 school year.

These delays should not impact grandparents’ ability to fund a 529 plan, because students only have to report the income on their College Scholarship Service Profile once the money has been released. Grandparents can continue to put money into the plan or leave instructions in their estate documents to fund the plan – it won’t affect student aid eligibility.

The 529 plans can be wonderful financial and estate planning tools, but they have a multitude of IRS regulations and state-based rules attached. So, if you’re interested in investing in one of these plans, it’s best to work with a knowledgeable estate planning professional. To learn more about 529 plans and how you can help future generations with their educational expenses, please reach out to Brian M. Douglas & Associates. One of our estate planning attorneys would be happy to discuss your best options. You can call us at (770) 933-9009 or use our online contact form.